This is my contribution to yesterday’s debate on UKGovt’s COVID-19 Economic Support Packages.

I have welcomed the change of tone from the Chancellor in recent weeks, however the package of support outlined by his Government is wholly inadequate during a time of financial pressure and the stark reality of a second wave of Coronavirus.

The Chancellor told us in March that no one would be left behind, but that has now become: Government support is not a universal scheme.

The Job Retention Scheme is to come to an end on 31st October, and the proposed ‘Job Support Scheme’ will not protect jobs, far from it.  Instead the end of the job retention scheme will lead to a tsunami of unemployment.

With mass unemployment on the horizon and other key support schemes being prematurely ended, it is critical that the Government heed the warnings from anti-poverty charities and strengthen the financial support package and extend the £20 uplift of Universal Credit. 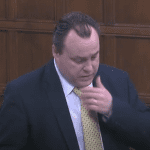